“Sunburnt Textures” is a title piece from my first solo exhibition 1987, shortly after which my textile art came under the influence of quilt making.   The design area is about 30cm x 45cm, of paint+stitch+found objects on white canvas, mounted on a stretcher bar.

In march this year I worked on a power point presentation about my textile art to use at two guest speaking events in Australia in May.  I found myself carefully considering this and other older works with fresh eyes after many years. The very old slide was a bit cleaned up around the irregular edges with PS to use as a background to the title “A Journey Through Landscape”

Also at that time I submitted an entry proposal for the  “Golden Textures” exhibition 2015, and included this sketch below.  The entry was accepted.  I planned to carry it out in gold stitchery on a darkish fabric, approx 1.3mh x 1mw, and brave or mad I knew it would take a long time.

Also in late April, I submitted entries for the Australia Wide 4 Exhibition opening Adelaide October this year – and this is a detail of one of the two I had chosen: 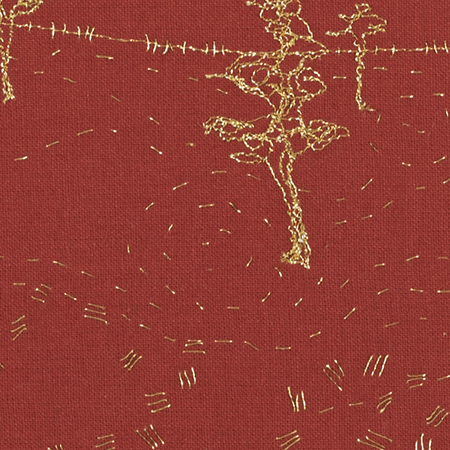 At 40cm square, and clearly on the same theme,  it became a sort of test piece for the Golden Textures entry. (this detail is about  10cm sq).   I’ve always loved hand stitch but the trees in this one are free machine embroidery. Well, the gold thread worked OK as you can see, but for a 1.3m x 1m piece it would take me many months of stitching as the metallic thread fairly quickly shredded, meaning needles had to be changed often.  I realized that on  that larger scale with the time I had available, it was not going to be possible, and so I changed my Golden Textures proposal, so that now, over 3/4 finished it is black stitch on a background of a less intense ochre-red/brown silk which glows beautifully….sometimes second thoughts are better.

This entry was posted on Friday, August 22nd, 2014 at 1:07 pm and is filed under General. You can follow any responses to this entry through the RSS 2.0 feed. You can leave a response, or trackback from your own site.